The Hate U Give 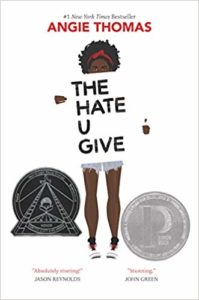 Published in 2017, The Hate U Give is a young adult novel by Angie Thomas that deals with a range of important contemporary issues, ranging from police violence and racism to youth and female empowerment.

From the moment of its debut, it dominated the charts as a best seller for the rest of the year, garnering a tidal wave of critical praise and literary awards.

The story follows Starr Carter, a 16-year-old African American girl, as she deals with the death of her best friend and the events that surround the deadly incident. As Starr struggles with her identity and the media narratives that dominate the discussion, she finds herself taking on an increasingly public role in an effort to advocate for justice in a system that seems to be failing in its duties time and again.

Resonating so strongly with the Black Lives Matter movement, The Hate U Give has added a fresh and poignant voice to the multitude of issues that so many people are still grappling with on a daily basis.

In fact, confidence in the relevance and strength of Thomas’s novel was so high that a movie adaptation was secured from almost the same time that her book was bought for publication. Released towards the end of 2018, the film was another critical success and has helped to draw further attention to ongoing struggles that are rooted in race and identity.

It might seem trivial to some, but the truth is that stories matter.

There is an ever-present need for diversity across all spheres of society, and publishing houses are capable of being important facilitators of that change. We need more voices to be heard that speak for those who were—or still are—politically and socially marginalized or outright silenced, and having books like The Hate U Give in libraries and bookshops is a solid step towards a popular media that is more balanced and representative of its actual audience.

Importantly, for all the anxieties and heartbreak that it captures, this is a novel that left us with a feeling of hope. There are no easy solutions here—only the determination to do what’s right. And that is a powerful thing indeed.

The Hate U Give is an emotional, insightful, and honest portrayal of contemporary life for a lot of people—especially those of color. The issues it presents you with are real and substantial, as is the path of empowerment that Thomas advocates through Starr: “What’s the point of having a voice if you’re gonna be silent in those moments you shouldn’t be?”

Angie Thomas’s second novel, On the Come Up, is expected to release on February 5, 2019. We can’t wait to check it out.

What novels or stories have you read that made you feel connected to the characters on a personal level? And what kind of characters do you wish there were more of? Let us know in a comment—we’d love to hear what you think!

13 thoughts on “The Hate U Give by Angie Thomas: Review”