Don’t miss out on these LGBT fantasy books ♥

For readers in search of LGBT fantasy books that are as empowering and charming as they are exciting, we’ve selected our favorites of the bunch to help you plan your reading list.

From sexual orientation to gender identity, there is a wide range of meaningful representation in the books below, and we’re sure they’ll win your heart over from the very first page. 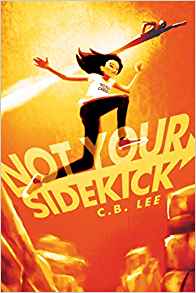 From the publisher: Welcome to Andover … where superpowers are common, but internships are complicated. Just ask high school nobody, Jessica Tran. Despite her heroic lineage, Jess is resigned to a life without superpowers and is merely looking to beef-up her college applications when she stumbles upon the perfect (paid!) internship—only it turns out to be for the town’s most heinous supervillain.

On the upside, she gets to work with her long-time secret crush, Abby, who Jess thinks may have a secret of her own. Then there’s the budding attraction to her fellow intern, the mysterious “M,” who never seems to be in the same place as Abby. But what starts as a fun way to spite her superhero parents takes a sudden and dangerous turn when she uncovers a plot larger than heroes and villains altogether.

“Jess and Abby are delightful characters and superhero fans like this reviewer will especially enjoy Lee’s take on how superpowers work. I’m ready for the sequel!” – RT Book Reviews

“Lee … offers up a fast-paced, engaging tale set in a quasi-dystopian 22nd-century America where the line between hero and villain is often blurred. With a diverse cast of characters, both in terms of sexuality and ethnic background, and a wholly adorable romance for Jess, it’s a lively exploration of morality in a superpowered age.” – Publishers Weekly

“Not Your Sidekick is a smooth read with characters who hit the likeable zone between being overly self-involved and unrealistically altruistic … A large part of the story deals with her expectations about what it means to be ordinary and what it means to be extra-ordinary. This is a theme that will speak strongly to the current generation.” – Queer Sci-Fi

Spend more time with Jess and her friends in the sequels Not Your Villain and Not Your Backup!

The Abyss Surrounds Us 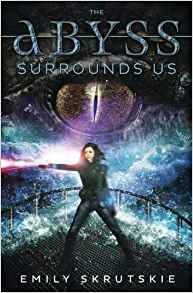 From the publisher: Cas has fought pirates her entire life. But can she survive living among them?

For Cassandra Leung, bossing around sea monsters is just the family business. She’s been a Reckoner trainer-in-training ever since she could walk, raising the genetically-engineered beasts to defend ships as they cross the pirate-infested NeoPacific. But when the pirate queen Santa Elena swoops in on Cas’s first solo mission and snatches her from the bloodstained decks, Cas’s dream of being a full-time trainer seems dead in the water.

There’s no time to mourn. Waiting for her on the pirate ship is an unhatched Reckoner pup. Santa Elena wants to take back the seas with a monster of her own, and she needs a proper trainer to do it. She orders Cas to raise the pup, make sure he imprints on her ship, and, when the time comes, teach him to fight for the pirates. If Cas fails, her blood will be the next to paint the sea.

“[A] fresh and fascinating look at a lawless future.” – Kirkus Reviews

“This is a solid, well-crafted, new adventure story with an interesting, unusual hook.” – Booklist

“The Abyss Surrounds Us is highly original and addictive.” – SLJTeen

Continue the story with the sequel, The Edge of the Abyss! 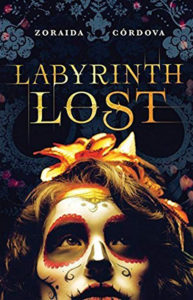 From the publisher: I was chosen by the Deos. Even gods make mistakes.

Alex is a bruja, the most powerful witch in a generation…and she hates magic. At her Deathday celebration, Alex performs a spell to rid herself of her power. But it backfires. Her whole family vanishes into thin air, leaving her alone with Nova, a brujo she can’t trust, but who may be Alex’s only chance at saving her family.

“Magical and empowering, Labyrinth Lost is an incredible heroine’s journey filled with mythos come to life; but at its heart, honors the importance of love and family.” – Cindy Pon, author of Serpentine and Silver Phoenix

“Labyrinth Lost is a magical story of love, family, and finding yourself. Enchanting from start to finish.” – Amy Tintera, author of Ruined.

“Enchanting and complex. Every page is filled with magic.” – Danielle Paige, New York Times best-selling author of Dorothy Must Die 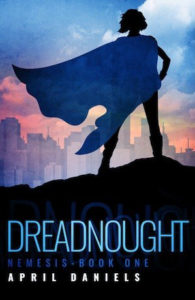 From the publisher: Danny Tozer has a problem: she just inherited the powers of Dreadnought, the world’s greatest superhero.

Until Dreadnought fell out of the sky and died right in front of her, Danny was trying to keep people from finding out she’s transgender. But before he expired, Dreadnought passed his mantle to her, and those secondhand superpowers transformed Danny’s body into what she’s always thought it should be. Now there’s no hiding that she’s a girl.

It should be the happiest time of her life, but Danny’s first weeks finally living in a body that fits her are more difficult and complicated than she could have imagined. Between her father’s dangerous obsession with “curing” her girlhood, her best friend suddenly acting like he’s entitled to date her, and her fellow superheroes arguing over her place in their ranks, Danny feels like she’s in over her head.

She doesn’t have much time to adjust. Dreadnought’s murderer—a cyborg named Utopia—still haunts the streets of New Port City, threatening destruction. If Danny can’t sort through the confusion of coming out, master her powers, and stop Utopia in time, humanity faces extinction.

“I didn’t know how much I needed this brave, thrilling book until it rocked my world. Dreadnought is the superhero adventure we all need right now.” – Charlie Jane Anders, author of All the Birds in the Sky

“A fascinating exploration of gender identity in a fantastical setting.” – Publishers Weekly

“This first title in the series offers a rich, unusual mix of subjects and themes for fantasy fans.” – School Library Journal

“I’m not normally a fan of superhero narratives, and then I find an exception that grabs me by the throat and makes me love it. Dreadnought is one of those exceptions.” – Liz Bourke, Tor.com 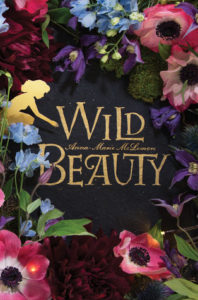 From the publisher: Love grows such strange things.

For nearly a century, the Nomeolvides women have tended the grounds of La Pradera, the lush estate gardens that enchant guests from around the world. They’ve also hidden a tragic legacy: if they fall in love too deeply, their lovers vanish. But then, after generations of vanishings, a strange boy appears in the gardens.

The boy is a mystery to Estrella, the Nomeolvides girl who finds him, and to her family, but he’s even more a mystery to himself; he knows nothing more about who he is or where he came from than his first name. As Estrella tries to help Fel piece together his unknown past, La Pradera leads them to secrets as dangerous as they are magical in this stunning exploration of love, loss, and family.

“A garden is the perfect setting for McLemore’s plush, sensuous prose, which unspools the story with delicious languor. Part mystery, part love story, this evocative, lush novel is a delight for sophisticated readers.” – Kirkus Reviews

“[A] vibrant and magical tale that readers will not easily forget … This fantastical tale will delight her fans and entice a new audience.” – School Library Journal

For more magical realism with LGBTQ+ themes, check out When the Moon Was Ours!

The One Who Eats Monsters

From the publisher: Long ago, before history broke in half, elder gods exiled the vengeful deity Erynis to a far corner of Earth. When Ryn is found weakened after saving the life of an innocent villager, the U.S. military mistakes the battered immortal for a feral teenager and places her in New Petersburg, a decaying city full of monsters.

In her clash with the city’s demons, Ryn is confused by her intense emotional connection with Naomi Bradford, a senator’s daughter she has sworn to protect. But while her claws can kill anything that dies (and a few things that cannot), she must also contend with the human race. They lie, they speak in riddles, and to protect her friend, the immortal must navigate the senseless rules of their flawed civilization. Worse, they are fragile—and giving her heart to one makes Ryn afraid for the first time in her eternal life.

What LGBT fantasy books have you read lately? Drop us a comment to let us know what hidden gems you’ve come across!