Make some time for these vampire books on your reading list ♥

Every so often, the vampire genre comes back from the dead to sink its fangs into popular culture. From angsty romances to pulse-racing danger, these characters grab hold of our imaginations and never let go.

To help you find your next favorite story, we’ve chosen the most popular vampire books for teens and young adults alike. Whether you prefer your vampires with a sexy sparkle or a sense of danger, the series below have a bit of something for everyone! 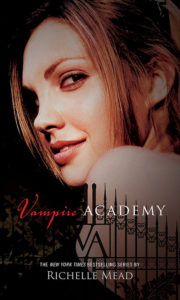 If you’re in the mood for a kick-ass heroine and an interesting take on vampire society, you’re sure to have a good time at Richelle Mead’s version of boarding school. (And by the way, we recommend reading the book before the watching the movie.)

From the publisher: Only a true best friend can protect you from your immortal enemies …

Lissa Dragomir is a Moroi princess: a mortal vampire with a rare gift for harnessing the earth’s magic. She must be protected at all times from Strigoi; the fiercest vampires – the ones who never die. The powerful blend of human and vampire blood that flows through Rose Hathaway, Lissa’s best friend, makes her a dhampir. Rose is dedicated to a dangerous life of protecting Lissa from the Strigoi, who are hell-bent on making Lissa one of them.

After two years of freedom, Rose and Lissa are caught and dragged back to St. Vladimir’s Academy, a school for vampire royalty and their guardians-to-be, hidden in the deep forests of Montana. But inside the iron gates, life is even more fraught with danger … and the Strigoi are always close by.

Rose and Lissa must navigate their dangerous world, confront the temptations of forbidden love, and never once let their guard down, lest the evil undead make Lissa one of them forever …

The story that kicked off the international #1 bestselling Vampire Academy series is NOW A MAJOR MOTION PICTURE!

“Mead’s absorbing, debut YA novel, the first in a new series, blends intricately detailed fantasy with a contemporary setting, teen-relevant issues, and a diverse, if sometimes stereotyped, cast of supporting characters. Occasional steamy sex and a scattering of vulgar language demand mature readers, but teens able to handle the edgy elements will speed through this vamp story and anticipate the next installment.” – Rosenfeld, Shelle

Continue the story with the exciting sequel, Frostbite! 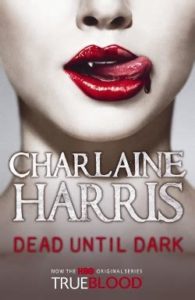 For fans of more mature characters, themes, and storytelling than you typically find in young adult vampire stories, the Sookie Stackhouse books are an easy pick. With a full cast of sexy, sweet, funny, menacing, and diverse characters, this series delivers a ton of fun and suspense. And even if you’ve already seen True Blood, the books are different enough to keep surprising you throughout.

From the publisher: Sink your teeth into the first novel in the #1 New York Times bestselling Sookie Stackhouse series—the books that gave life to the Dead and inspired the HBO® original series True Blood.

Sookie Stackhouse is just a small-time cocktail waitress in small-town Bon Temps, Louisiana. She’s quiet, doesn’t get out much, and tends to mind her own business—except when it comes to her “disability.” Sookie can read minds. And that doesn’t make her too dateable. Then along comes Bill Compton. He’s tall, dark, handsome—and Sookie can’t hear a word he’s thinking. He’s exactly the type of guy she’s been waiting for all her life…

But Bill has a disability of his own: he’s a vampire with a bad reputation. And when a string of murders hits Bon Temps—along with a gang of truly nasty bloodsuckers looking for Bill—Sookie starts to wonder if having a vampire for a boyfriend is such a bright idea.

“It’s the kind of book you look forward to reading before you go to bed, thinking you’re only going to read one chapter, and then you end up reading seven.” – Alan Ball, executive producer of True Blood

“Vivid, subtle, and funny in her portrayal of southern life.” – Entertainment Weekly

“The series continues to be inventive and funny with an engaging, smart, and sexy heroine.” – The Denver Post

“Blending action, romance, and comedy, Harris has created a fully functioning world so very close to our own, except, of course, for the vamps and other supernatural creatures.” – The Toronto Star

The Sookie Stackhouse series continues with the gripping sequel Living Dead in Dallas! 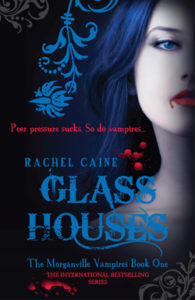 The Morganville Vampires is perfect for fans of Buffy the Vampire Slayer. It offers plenty of paranormal fun and creepiness in a dark but still PG style, and it has a great supporting cast of quirky characters.

From the publisher: From the author of the popular Weather Warden series comes the debut of an exciting new series set in Morganville, Texas, where you would be well advised to avoid being out after dark.

College freshman Claire Danvers has had enough of her nightmarish dorm situation. When Claire heads off-campus, the imposing old house where she finds a room may not be much better. Her new roommates don’t show many signs of life, but they’ll have Claire’s back when the town’s deepest secrets come crawling out, hungry for fresh blood. Will she be able to face the town’s terror or will she drown like everyone else?

by P.C. and Kristin Cast 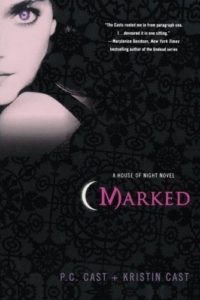 The House of Night series takes the familiar setting of a boarding school for paranormal teens and gives it a memorable twist. While certain attitudes and behaviors presented by the cast can be unpleasant at times, their personalities and perspectives continue to grow throughout the novels, often in surprising ways.

From the publisher: The House of Night series by bestselling authors P.C. Cast and Kristin Cast is set in a world very much like our own, except in 16-year-old Zoey Redbird’s world, vampyres have always existed. In this first book in the series, Zoey enters the House of Night, a school where, after having undergone the Change, she will train to become an adult vampire–that is, if she makes it through the Change. Not all of those who are chosen do. It’s tough to begin a new life, away from her parents and friends, and on top of that, Zoey finds she is no average fledgling. She has been Marked as special by the vampyre Goddess, Nyx. But she is not the only fledgling at the House of Night with special powers. When she discovers that the leader of the Dark Daughters, the school’s most elite club, is misusing her Goddess-given gifts, Zoey must look deep within herself for the courage to embrace her destiny–with a little help from her new vampyre friends.

“From the moment I stuck my face in this book it hooked me! Totally awesome new take on vampires! Marked is hot and dark and funny. It rocks!” – Gena Showalter

“Cast reeled me in from paragraph one. I snorted and giggled through the whole thing, and devoured it in one sitting.” – MaryJanice Davidson

The twists and turns continue in the House of Night sequel Betrayed! 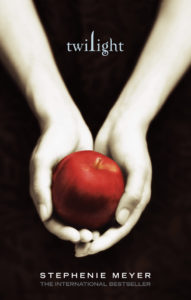 “People do not want to just read Meyer’s books; they want to climb inside them and live there.” – Time

What vampire stories have kept you reading late into the night? Drop us a comment to let us know what your favorites are!

8 thoughts on “Vampire Books for Teens”