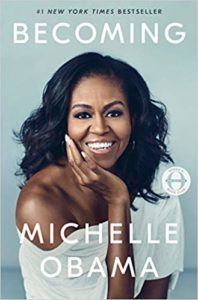 Every so often, a book appears that is everything you hoped it would be: insightful, revealing, and deeply relevant. In a time when so much of our attention is monopolized by toxic and intolerant messaging, it feels almost restorative to read through Michelle Obama’s timely memoir, Becoming.

That isn’t to suggest that the book provides an overly sanitized account of Obama’s life and her engagement with issues of race, politics, and personal identity. The insights that are given to readers don’t shy away from the hard realities that were part of her journey—and still are present in her life today.

What shines here is the voice of reason that underlies the entire account. At its heart, it champions what so many people crave to see in leadership now: simple human decency and an honest self-awareness in the pursuit of bringing positive change.

“Life was teaching me that progress and change happen slowly. We were planting the seeds of change, the fruit of which we might never see. We had to be patient.”

In Becoming, Michelle Obama reveals the highs and lows of her own struggles growing up, as well as those that she has shared and confronted with her husband, Barack. Their lives, of course, have not been common; their rise to the top of global politics has shaped and determined many decisions along the way, both in terms of their personal lives and in regard to their public responsibilities. But Obama is clear about the values that she protects and helps to promote, and these are all deeply common to us all.

They’re human values, rooted in basic principles of dignity. It’s a strong foundation upon which to connect with people, and it’s strengthened by the fact that it isn’t a naive or idealistic vision that fails to account for the real world. It’s one that she had to develop herself, through introspection and experience alike, in growing up as a witness to the harmful effects of racism and discrimination.

Naturally, this is not something that just disappeared upon her becoming the first lady. In some ways, perhaps, it even intensified, as many white conservative commentators and politicians treated her and her husband’s political rise to both racist insults and jokes. But the United States was ready for change, and the Obamas were ready to deliver it as best they could.

As is life, not all attempts were as successful as they were envisioned—frustrations and failings will always exist—but the core of her efforts has always upheld the values of her spoken words. She acts in the manner of her beliefs, and Becoming offers a sincere view of how the world of politics has affected both her and her marriage. As she writes of life with her husband: “Coexisting with Barack’s strong sense of purpose … was something to which I had to adjust.” The candor with which she reveals the heartaches and anxieties of her personal life is more than simply humanizing: it’s strengthening.

This all adds to a portrait that feels incredibly authentic, even through its upfront style of overtly taking the high road. After all, Michelle Obama makes no secret of her personal aversion to politics, which is a tremendous thing for a first lady to grapple with, and it stays true to what was evident back then during her time in the White House, as well as to her life today, having left that position.

The consistency of her character is something that is hard to dispute in reading Becoming, and for those who have read her husband’s writings, this impression is reinforced convincingly. Her writing style throughout gives space for her to inject a measure of her own personality into the narrative, which helps to maintain the candid emotion that it captures.

This is perhaps where the memoir is at its strongest. Obama uses the important moments of her life not to simply offer a retelling of them but to use each one to provide context and insight into the person she is and has become. The value of treating life experiences with thoughtful and introspective care is powerful, and it’s something that’s greatly needed as we navigate the social and political turbulence of today.

Indeed, Becoming doesn’t fail to address the current state of U.S. politics and the country as a whole, not to mention her own position and anxieties about the situation as it currently stands, with much of her and her husband’s work being crudely dismantled or damaged by the Trump administration.

Through it all, Michelle Obama writes with a direct and powerful voice, which never comes at the expense of her commitment to the core values of decency. It’s an honest, considerate, and relevant take on where America is today—and who she is within it.

Becoming is an insightful memoir of the life and times of Michelle Obama, sharing her experiences from before, during, and after her position as first lady. It comes at a time of sweeping social divisions and political upheaval, yet the commentary it offers tackles the issues of race and gender with both thought and strength.

This book has a message to share that is not only relevant for where we are in the world today; it is also an appeal to repair the governance that we need to move forward constructively and healthily—together.

As companion books, we recommend these two by Barack Obama: Dreams from My Father: A Story of Race and Inheritance and The Audacity of Hope: Thoughts on Reclaiming the American Dream.

What books have you read lately that you found inspiring or insightful? Let us know in a comment—we always love to hear from you!