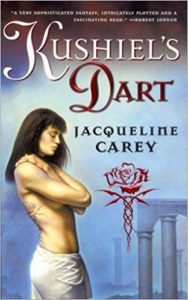 Written by the hugely talented Carey, Kushiel’s Dart is an ambitious and sensual epic fantasy that marks the beginning of an entire trilogy of trilogies.

The fact that all of these novels are quite long can make the decision to embark on this journey a little bit daunting. Once the tale begins, however, the prose and characters are so alluring that you’re quickly drawn in to the rich setting and the author’s pace of storytelling.

The protagonist of this first trilogy is Phèdre, a young girl marked by Kushiel’s Dart, which reveals itself as a small red fleck in her eye. The consequence of this is that Phèdre takes pleasure in being the subject of pain—a dangerous trait that is soon put to political use by those around her.

In order to weave this particular blend of eroticism into the story, Carey has put tremendous effort and care into crafting a world that reveres and celebrates sexuality of all kinds. Terre d’Ange, the so-called Land of Angels, is the country in which the main story occurs. Here, love and sex are deeply bound to religion, and courtesans are trained from an early age to master the art of providing pleasure. It’s a holy calling that these courtesans pursue while attempting to earn their full marque: a tattoo that runs from the back of their neck to their tailbone.

Taken in by Anafiel Delaunay, who becomes both a father figure and a mentor to Phèdre, she soon becomes embroiled in the dangerous—and often violent—world of politics. Realizing the value of Phèdre’s masochistic sexuality, not to mention her high level of intelligence and charisma, Delaunay trains and utilizes her as a spy to gather information from the bedrooms of important political figures. As both characters learn, however, there are great dangers that come with this, and high prices that need to be paid—often in blood.

This is merely the prelude to what the story becomes: an epic journey of love, loss, sacrifice, betrayal, and loyalty. The political maneuvering around Phèdre remains a constant threat to her and the people she loves, and it’s all so intricately plotted and beautifully written that every encounter that she has, whether it’s with a friend or an enemy, leaves a lasting impression.

Kushiel’s Dart is a beautifully written and intricately plotted tale, with overlapping layers of court intrigue and grand-scale adventure, all underpinned by a young woman’s sexuality, agency, and eroticism.