There are few genres with as much freedom to be creative and wonderfully weird as children’s books. From magical mishaps and philosophizing animals to food falling out of the sky, it’s a world where our imaginations are allowed to run wild, untethered by reality.

Of course, when it comes to weird children’s books, some capture the strange and bizarre more meaningfully than others. So here are the stories that have left the biggest impression on millions of childhoods around the world and made our lives so much richer for growing up with them. 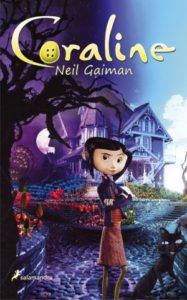 From the publisher: The day after they moved in, Coraline went exploring …

In Coraline’s family’s new flat are twenty-one windows and fourteen doors. Thirteen of the doors open and close.

The fourteenth is locked, and on the other side is only a brick wall, until the day Coraline unlocks the door to find a passage to another flat in another house just like her own.

At first, things seem marvelous in the other flat. The food is better. The toy box is filled with wind-up angels that flutter around the bedroom, books whose pictures writhe and crawl and shimmer, little dinosaur skulls that chatter their teeth. But there’s another mother, and another father, and they want Coraline to stay with them and be their little girl. They want to change her and never let her go.

Other children are trapped there as well, lost souls behind the mirrors. Coraline is their only hope of rescue. She will have to fight with all her wits and all the tools she can find if she is to save the lost children, her ordinary life, and herself.

Critically acclaimed and award-winning author Neil Gaiman will delight readers with his first novel for all ages.

“You don’t have to be a kid to appreciate the spell Gaiman casts in the suspenseful Coraline. Walk through the door and you’ll believe in love, magic and the power of good over evil.” – USA Today

“I think this book will nudge Alice in Wonderland out of its niche at last. It is the most splendidly original, weird, and frightening book I have read, and yet full of things children will love.” – Diana Wynne Jones

“Coraline may be Gaiman’s most disciplined and fully controlled novel to date, and it may even end up as something of a classic.” – Locus

“Rise to your feet and applaud: Coraline is the real thing.” – Philip Pullman, author of His Dark Materials

A Wrinkle in Time 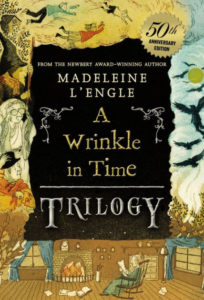 From the publisher: This special edition of A Wrinkle in Time includes a new essay that explores the science behind the fantasy.

Rediscover one of the most beloved children’s books of all time: A Wrinkle in Time by Madeleine L’Engle:

Meg Murray, her little brother Charles Wallace, and their mother are having a midnight snack on a dark and stormy night when an unearthly stranger appears at their door. He claims to have been blown off course, and goes on to tell them that there is such a thing as a “tesseract,” which, if you didn’t know, is a wrinkle in time.

Meg’s father had been experimenting with time-travel when he suddenly disappeared. Will Meg, Charles Wallace, and their friend Calvin outwit the forces of evil as they search through space for their father?

A well-loved classic and 1963 Newbery Medal winner, Madeleine L’Engle’s A Wrinkle in Time is sophisticated in concept yet warm in tone, with mystery and love coursing through its pages … Every young reader should experience L’Engle’s captivating, occasionally life-changing contributions to children’s literature. – Emilie Coulter 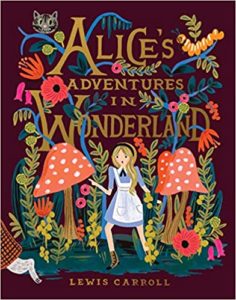 From the publisher: Commemorating the 150th anniversary of Alice’s Adventures in Wonderland with a deluxe oversized hardcover edition, illustrated in full color by Anna Bond of Rifle Paper Co.

It’s been 150 years since Lewis Carroll introduced Alice’s Adventures in Wonderland, the story which has become a favorite of children and adults the world over. Now, in a deluxe hardcover edition from Puffin, Alice’s story comes to life for a whole new generation of readers through the colorful, whimsical artwork of Anna Bond, best known as the creative director and artistic inspiration behind the worldwide stationery and gift brand Rifle Paper Co. Lose yourself in Alice’s story as she tumbles down the rabbit hole, swims through her own pool of tears, and finds herself in a rather curious place called Wonderland. There, she’ll encounter the frantic White Rabbit, have a frustrating conversation with an eccentric caterpillar, and play croquet with the hot-headed Queen of Hearts. Follow Alice on her wild adventure through the eyes of the artist in this definitive gift edition.

“The pretty face of Anna Bond’s Alice looks continually astonished, and even in the scene where her neck grows freakishly serpentine, the heroine remains comely. Elegant and unthreatening, Ms. Bond’s pictures abound with so many flowers and curling vines that Wonderland seems a much nicer place than perhaps we remembered.” – Wall Street Journal

A Series of Unfortunate Events 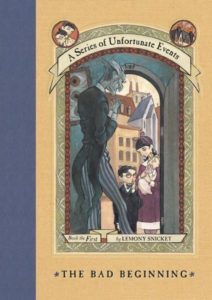 From the publisher: Dear Reader,

I’m sorry to say that the book you are holding in your hands is extremely unpleasant. It tells an unhappy tale about three very unlucky children. Even though they are charming and clever, the Baudelaire siblings lead lives filled with misery and woe. From the very first page of this book when the children are at the beach and receive terrible news, continuing on through the entire story, disaster lurks at their heels. One might say they are magnets for misfortune.

In this short book alone, the three youngsters encounter a greedy and repulsive villain, itchy clothing, a disastrous fire, a plot to steal their fortune, and cold porridge for breakfast.

It is my sad duty to write down these unpleasant tales, but there is nothing stopping you from putting this book down at once and reading something happy, if you prefer that sort of thing.

With all due respect,

“Hilarious. Luckily for fans, the woes of the Baudelaires are far from over.” – Publishers Weekly

“Those who enjoy a little poison in their porridge will find it wicked good fun.” – Kirkus Reviews

“Written with old-fashioned flair, this fast-paced book is not for the squeamish: the Baudelaire children are truly sympathetic characters who encounter a multitude of distressing situations. Those who enjoy a little poison in their porridge will find it wicked good fun.” – Kirkus Reviews

“With a cast of unforgettable characters, a distinctly literary air, and plenty of laugh-out-loud moments, this is a great match for dark comedy fans.” – Brightly 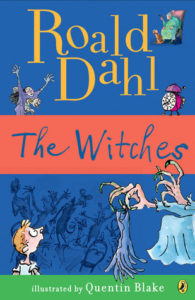 From the publisher: This is not a fairy-tale. This is about real witches. Real witches don’t ride around on broomsticks. They don’t even wear black cloaks and hats. They are vile, cunning, detestable creatures who disguise themselves as nice, ordinary ladies. So how can you tell when you’re face to face with one? Well, if you don’t know yet you’d better find out quickly-because there’s nothing a witch loathes quite as much as children and she’ll wield all kinds of terrifying powers to get rid of them.

Cloudy with a Chance of Meatballs 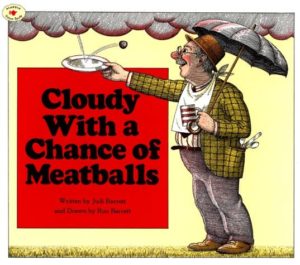 From the publisher: The beloved, bestselling tale of edible weather is brought to life!

If food dropped like rain from the sky, wouldn’t it be marvellous! Or would it? It could, after all, be messy. And you’d have no choice. What if you didn’t like what fell? Or what if too much came? Have you ever thought of what it might be like to be squashed flat by a pancake? 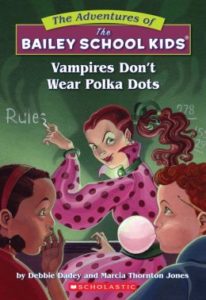 The kids in the third grade at Bailey Elementary are so hard to handle that all of their teachers have quit. But their new teacher, Mrs. Jeepers, is different to say the least. She’s just moved from the Transylvanian Alps and she seems to have some strange powers that help her deal with these mischief-makers. Her methods may be a little unconventional, but, then again, Mrs. Jeepers may be just what the Bailey School kids need. 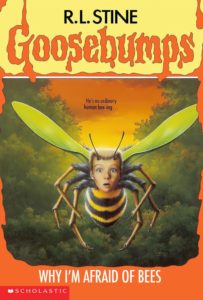 From the publisher: They’re baa-ack! Make way for the bestselling children’s series of all time! With a fresh new look, Goosebumps is set to scare a whole new generation of kids. So reader beware—you’re in for a scare!

Gary Lutz needs a vacation … from himself. Bullies are constantly beating him up. His only friend is his computer. Even his little sister doesn’t like him.

But now Gary’s dream is about to come true. He’s going to exchange bodies with another kid for a whole week.

Gary can’t wait to get a new body. Until something horrible happens. And Gary finds out his new body isn’t exactly human …

What weird children’s books did you read as a kid? Drop us a comment to let us know what your favorites were!