Chengyu are a form of traditional Chinese idiom. Most of them consist of four characters and convey a wide range of nuanced meanings. Learners of Chinese will usually encounter them early on in their studies, although the sheer number of them can be intimidating for new and experienced speakers alike.

The precise number of chengyu is impossible to say, but there are approximately 5,000 of them in common use (with as many as 20,000 cited by some sources, although the vast majority are quite obscure). With The Chinese Idiom Dictionary, we’ve set out to help students (and anyone with an interest in Chinese culture or philosophy) to learn chengyu and appreciate their cultural and literary value.

These idiomatic sayings provide valuable and fascinating insights into the culture, history, and collective wisdom of the Chinese people, touching on topics from love and beauty to war, business, and morality. As a result, a deep understanding and mastery of these expressions is regarded by many as a reflection of high education and cultural sophistication.

But even on a more personal level, chengyu are a natural part of any learner’s journey to becoming fluent in Chinese: it is incredibly hard to “walk the talk” as a higher-level speaker or listener of the language without being able to recognize their usage or understand the specific meaning they impart in a particular context.

The origins of chengyu

Although most chengyu have their origin in ancient or classic Chinese literature, there is a fair number of them that have emerged from even the twentieth century (especially from Western material that has increasingly found global audiences over the past two hundred years).

In many cases, chengyu offer a form of precis of the original story they originate from, retelling it in an extremely succinct and conceptual way. Other chengyu are direct quotes from their source material, utilizing key characters in the poem or story and adding in necessary particles to make them grammatical. As a result, these chengyu can often be seen as snapshots of Classical Chinese literature, with all the archaic vocabulary and conventions that such historical material necessarily involves.

By their nature, this means that chengyu impart information far more concisely (and thus abstractly) than people do in their regular speech and writing, which is part of the reason why new learners of Chinese can struggle to grasp their nuanced meanings. Another reason is the fact that chengyu can take the role of any part of speech, from an independent clause (that is, one with a subject and predicate) to a noun, verb, adjective, or adverb. Naturally, this requires a good foundation in the language to reliably use and interpret such phrases correctly.

Given how conceptual the language often needs to be to convey a multifaceted moral or message in around four characters, the modern translations usually require a fair amount of either contextual information or localization to assist with their intended meaning. Otherwise, the reader or listener can be faced by a group of characters that don’t seem to express an intelligible meaning in isolation.

Of course, not all chengyu originate from ancient stories, poems, and myths, as this dictionary demonstrates. There are a number of idiomatic expressions that have direct English equivalents. Although these are more recent additions to the language, as we mentioned a bit earlier, it is interesting to see that they still use the vocabulary and syntax of Classical Chinese, adopting the general structure of four characters to convey their meaning. This qualifies them as chengyu for inclusion in our three-volume series of dictionaries.

For more, check out resources on Chinese language and culture! 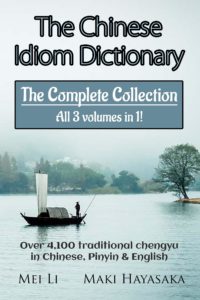 For every chengyu, we provide the original form of the expression, Pinyin and English translations (with additional contextual notes as needed), the source from which that saying originates, as well as the relevant quote for context. It is our hope that this resource will assist new and experienced speakers of Chinese to gain a deeper insight into this ancient and fascinating culture. And what better way to achieve that than through the beauty of its language?

We’re excited to be joining you on this journey!

It can be a bit daunting to learn Chinese, especially in the beginning, so we’d love to hear what your experience has been like. What chengyu have you come across in books or conversations that stood out to you? Drop us a comment to let us know!